A Peak into the Future of White - A Speculation 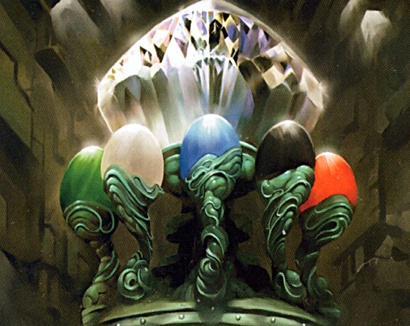 Mark Rosewater just updated his color pie article from 2017. If you’re not a Magic card designer or a wannabe card designer, then perhaps that doesn’t excite you all that much, but it should be one of the most exciting pieces of Magic: the Gathering news you haven’t read. Listen, I applied for the great designer contest years ago and missed moving one by one multiple choice question. I was pretty close to picking the correct answer to every question I got wrong (I had it narrowed down to a 50/50 shot in each instance save one (I got that one way wrong). I like the ideas behind designing cards, I’ve studied Magic’s card design, and I enjoy parsing through the rules from time to time. So, I’m here to let you know what is actually super exciting about his updates and changes. Yeah, may as well lead with the biggest draw (pun intended), as White card draw is definitely a huge part of Rosewater’s updated list. He specifically calls out the need for card flow in the Commander format. White is going to be drawing cards over time—not all at once. This translates to White being able to draw a card each turn (other people’s turns included, so this is significantly better in the multiplayer Commander format we all love). Thus, more card drawing when you have more opponents. This is basically a sound fix for White card draw as it gets better with conditions, more players, and still fits White in a unique way that allows it to not suddenly become a card drawing color. This should be a solid way to keep White draw from bleeding into blue by drawing mass cards from spells designed simply to draw cards. This is a great thing to include, and it actually helps make all the rest of the changes that White is seeing become more and more exciting. Banisher Priest effects are officially a White piece of the color pie, and will remain White’s thing for the immediate future. That’s comforting to know, because as more cards release we can expect to see more Banisher Priest style effects that can help offer White even more removal options. This is exciting for Commander players, as we now get to look for more options with this particular type of removal. Oblivion Ring helped get this style of removal started, and it’s been a long-time staple of for White since. Just know that you’ll see more of the same, and probably some more reprints.

The only color that gets to tell people they can’t attack you or at least can’t attack you as long as a particular card is out is going to be a White thing. Green has had it in the past, but it’s a rare thing, so we won’t be seeing it anytime soon. However, if this effect does arrive, then expect it to be a powerful card (rare/mythic), as this is a unique effect. This is stuff like a Blazing Archon, Island Sanctuary, Spiritual Asylum, Peacekeeper, Chronomantic Escape, and to a lesser extent Change of Heart. A conditional version of this popped up more recently with Combat Calligrapher, but overall it isn’t nearly as powerful (although definitely more fun to play at a Commander table) than the aforementioned Blazing Archon. Perhaps even more exciting than extending an existing concept is the actual removal of some text box options. Rosewater says they’ve stopped making cards that can block multiple Creatures, so now seems like as good a time as any to start snapping up your copies of Avatar of Hope, Ironfist Crusher, Entangler, Foriysian Interceptor, Give No Ground, Guardian of the Gateless, Palace Guard, Thoughtweft Trio, Valor Made Real, and Wall of Glare. These effects probably aren’t going to be seen again, and so they may not be as rare as Blaze of Glory (reserved list), but will soon become rarer as allowing multiple blocks by the same defending Creature is apparently a thing of the past. I don’t think it’s likely these cards will jump in price, but if you’re into having unique effects and surprising people, then these cards may just be your ticket to blocking.

White Removal is King of Replacements Speaking of Blue, don’t expect to see blue transforming anything permanently anymore. Blue is no longer going to exile/destroy Creatures and give you tokens with cards like Pongify. However, blue is going to be able to temporarily transform powers, toughnesses, and text boxes, yet it will do so with “until end of turn” effects and auras. I know this is White speculation article, but picking up blue cards with these effects might be a good idea, because we probably won’t be seeing these anytime in the future, and I expect that cards like Ravenform won’t be seen anytime at all over the next three years. Moving forward, White is going to be the only color that gets to do this compensatory removal. These are cards like Angelic Ascension, Divine Gambit, Secure the Wastes, and the newer Fateful Absence. White will also be able to remove Creatures without compensation, but those will be spells that cost extra, like Iona’s Judgment. The gold standards for removal will still be Swords to Plowshares and Path to Exile, so I expect those cards to continue to hold a decent price moving forward. Newer removal will be unique, but it is unlikely to rival the old standards. The only exception would be newer black and White cards. We can likely expect those to continue to be excellent pieces of targeted removal, like Anguished Unmaking, Rite of Oblivion, Despark, Vanishing Verse, and Utter End. Perhaps one of the most speculative pieces is White’s caring about Planeswalkers. Clearly, White is the color that cares about Planeswalkers, and is the only color that will be returning those permanents to the battlefield. White can currently return permanents to the battlefield, but mono-White cards don’t currently bring back Planeswalkers by name. The only White cards that can do that now, barring those with casting cost limits like Sevinne's Reclamation and Sun Titan, are Profound Journey and Triumphant Reckoning. I believe this is Rosewater letting a bit of the future slip into his current state of affairs. This means that anything White has now that positively interacts with Planeswalkers is only going to get better with time. I’m specifically looking at the following cards: Ajani Steadfast, Arena Rector, Call the Gatewatch, Deploy the Gatewatch, Djeru, With Eyes Open, Ignite the Beacon, Oath of Gideon, and the superfriend’s super sweeper that is Urza's Ruinous Blast. I honestly believe that barring a reprint in a Commander Precon, these cards all have a chance to go way up in value over the coming years. They all work really well in White, and will be even better when combined with repeatable card drawing. It sounds as though the card drawing may be linked with Creatures, also prioritizing token-making Planeswalkers should help to hedge your bets.

I fully intend to pick several more copies of the cards I’ve mentioned so far, as they are pieces that I can get in on for very little cost. Most of these cards are from sets that are either already scarce, like Battlebond, or old enough to have the supply dry up quickly once demand for them increases—Deploy the Gatewatch. I can see many of these cards that are currently hanging out around the $1-$1.50 mark going up to $5 once people start respecting White’s transformation into a viable option for a mono-colored Commander deck. I think White is already fine to build on its own, as you may remember my deck tech on Djeru, With Eyes Open, but with the continued introduction of more card flow for White—the rest of Commander players might start to notice. I don’t know about you, but I hate being the last one to realize a $1 rare or $1 mythic is now suddenly $5-$20, and I can no longer justify running it. Granted, this is all speculation, and I could be totally off about what Rosewater has accidentally hinted at with his article, but then again I may just be on to something here. Until next time, may your speculations and cards be ever in your favor!