Battle for Baldur’s Gate is Good for Players Battle for Baldur’s Gate has become a set that some people have started maligning. I’m assuming those people are not players, or at least not Commander players. Furthermore, I’m assuming those people haven’t drafted it yet either. I’ve had the chance to digest this set for a while now, and it still has so very much left to give. This set keeps on giving, but I guess that people who haven’t actually played with these cards are feeling that they are somehow defined solely by their monetary value. That, my friends, is truly foolish. I have championed odd-ball and budget cards often in my column, but today I’d like to champion this second Commander Legends set for truly being a fantastic value. Seriously, let’s break down why this set is so great for Commander players and why the card investors have it all wrong. Battle for Baldur’s Gate has some seriously fun mechanics. Admittedly, there was only one new mechanic that got added with this set, but it was a truly elegant solution to the draft/constructed balance of the Commander format. In the past, creating Legends with Partner quickly became problematic. Having Partners with multiple colors made it become a quick race to have the most efficient, and boring combinations possible. It’s not very fun if we can always have 4 or even five colors handy with incredibly efficient Commanders. Wizards caught on quickly, and they’ve since kept from printing options like Thrasios, Triton Hero. Instead Legends only get the “Partner With” when multi-colored, and must be mono-colored to get the “Partner” mechanic printed on them these days. Yet, we’ve managed to avoid making the partner pool even deeper by utilizing these new things ironically called Backgrounds. The Background mechanic, really just a card type, allows an elegant solution to the partner pool problem. Granted, the background pool could become an issue as they grow in number. For now, the Background mechanic allows Legends to be printed that get to offer limited players color options and build options that are unique, interesting, and down-right fun! Background is phenomenally fun in that you can build your Legend in a way that is reminiscent of Dungeons and Dragons character creation. While I’m not trying to sell you on how awesome this set is based on Vorthosian principles like how well the story is communicated or Melvin-esque attention to the interplay of the mechanics—it is worth noting that Baldur’s Gate checks all those boxes rather nicely. Heck, it even checks boxes for all the original Johnny/Spike/Timmy psychographic profiles as well. It is a set that offers pieces for everyone, but perhaps leaves Spikes least to play with. Again, I’m more interested in showing you how much this set offers us, and backgrounds are a fun way to build out a variety of new decks with so many options to customize and brew to your heart’s content!

One of the best places to get ideas of how to brew your new creations from Baldur’s Gate is actually drafting the set. I know product is supposed to be 20% more expensive, but it seems that Baldur’s Gate thought the message was a 20% discount!? This is the best set for picking up a draft booster box and playing with your friends. You can split a box for a very affordable price, and then while you are drafting it you can not only build yourself an interesting limited deck, but then start seeing the possibilities for a constructed brew from those same seeds. That’s fantastic value, but when you consider that each pack has so many seeds in the form of Legendary Creatures, then you start realizing that your choices for Commanders have exploded. There are so many new decks possible with the influx of Legendary Creatures and Backgrounds from Baldur’s Gate. The number of possibilities is astounding, and when you compare it with the previous Commander Legends set you realize that Commander Legends sets, there are two of them now, just explode the number of Legends available. Between the preconstructed decks and the main set there’s so many new Commander choices it darn near boggles the mind. It really doesn’t matter what type of player you are—if you play Commander, then there’s something new to brew. That’s exciting. However, it’s also exciting to get even more value out of your experiences. You don’t have to be a Jund player to want more value. Just look at the prices of the cards in this set. Many people consider that the extra Legendary slots that were created to make the drafting environment skate along as smoothly as possible made the set worse. Many of those people are those that wanted the Legendary rares and mythics to be the chase cards in the set. They wanted those cards to be worth more money. Well, simply put, that did not happen. Thank the Magic gods that it didn’t. Now, you can pick up nearly every single legendary creature and background from this set for under $5. That includes the Planeswalkers that can be Commanders. Heck, I’m pretty sure you can pick up a copy of every single card that is made in the foil-etched form (around 60 or so cards) for about as many dollars. That’s an incredibly budget friendly way to expand your Commander choices. There’s not a single regular rare from the set that costs more than $20. There’s also only five or so cards over the $20 mark in the entire set. That makes this one of the most incredibly affordable sets to pick up singles. You can pick up nearly all of the set for less than the price of one box. That’s a little crazy. Meanwhile, there’s one card that is nearly as much as a box itself— Ancient Copper Dragon. The biggest of the big mythic dragons—well it has the biggest price tag. Does every deck need this card? No. Does that mean people will eventually realize that other cards from this set are good and worth playing, probably? However, until they do, then it’s time to buy, buy, buy! Singles are great and all, but if the discount on these boxes keeps up, then I still have to keep pushing buying boxes for the sake of drafting it. Sure, the singles are affordable, but the reprints, the new cards, and the overall draft experience is definitely worth it. 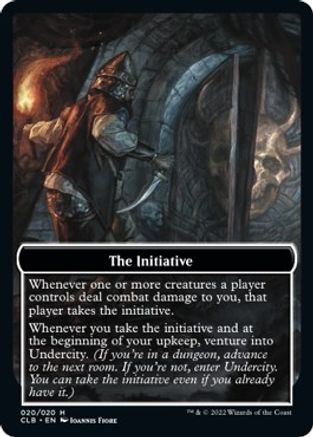 The draft itself is a ton of fun. Building your deck as you go is a fun experience. Being able to build a Commander style deck is blast, and using the backgrounds can be interesting as well. Even if you don’t use them as backgrounds for the Commander you can still include them in the deck’s 59. Anyway, the format is swingy, grindy, and is prone to shifting several times throughout the game. The other “new” mechanic in the set is incredibly powerful—delve into the dungeon by taking the “initiative”. Taking the initiative is similar to “the Monarch” mechanic, but this “edge” is actually a bit more sneakily powerful in this particular draft format. Where Monarch makes people want to attack to get those extra cards, the initiative really wants you to commit to taking it, and keeping it. You need to keep it in order to get those crazy payoffs. Heck, you can just play cards that take it back and then you get those crazy payoffs from both the dungeon and the cards that doubly pay you for not only having the initiative, but for completing the dungeon. This mechanic is sneakily powerful, and should not be underestimated. Meanwhile, it helps to create a game that has a sub-game within it. Rather than just drawing cards to make your deck do things it should do, like when you are the monarch, this mechanic adds all sorts of extra tools to people’s decks that actually make a huge difference. Making someone lose 5 life late in the game is actually frightening. Overall, it helps weaker decks do some things they couldn’t otherwise do, and it can even be a build-around concept. Meanwhile, the rest of the mechanics in the set are just cool concepts for Commander, like Myriad, but I don’t think you need me to rehash those tried and true joys. Basically, Battle for Baldur’s Gate limited feels like a real game of Commander—and that’s the goal. So, it’s pretty nice that you can draft the box, play games of Commander limited-style, and then utilize most of those cards to build new Commander decks. That’s a serious win-win situation for a Commander player.

Basically, if you have gotten distracted by the cool reprints in the pricey set that this Double Masters 2022, then perhaps you should look back to the deals that abound in Baldur’s Gate. I seriously think that comparing these two sets is unfair. However, Baldur’s Gate is the best deal going, and if you’re not on that fun little gravy train, then come hop on it now. Until next time, may the initiative, prices, and the cards remain ever in your favor.