Hello, and welcome to our Commander Deck Tech series! Today, we are going to focus on Jace, Vryn's Prodigy, or as we will be calling him, Jace VP. I love mono-blue as a commander option so take what I say with a grain of salt! I can't help but be biased. Mono-blue decks are primarily focused around controlling the game with counterspells and bounce spells, which just so happens to be my favorite thing to do in the game. Out of all the colors in Magic, blue has always appealed to me as the color of order and control, along with combos and interesting finishers to win us the game! 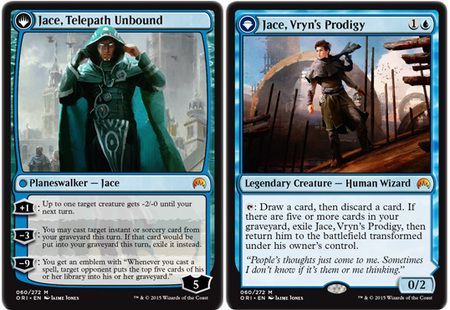 There are a ton of viable Mono Blue commanders; Baral, Chief of Compliance, Teferi, Temporal Archmage, and Talrand, Sky Summoner are all fan favorites. After playtesting with all of these commanders with similar control builds, Jace VP offers a consistent form of card filtering and advantage throughout the game. Baral, Chief of Compliance acts as a Sapphire Medallion and offers similar card advantage, but we have to counter a spell in order to use the cycling, which may not happen most of the time throughout the game. Baral is the most similar in power level but is less flexible than Jace VP.  Teferi, Temporal Archmage offers really great advantage but his ability seems to come at a cost with his expensive CMC. Talrand is a one card engine that can take over a game but can be clunky and hard to get in play without the help of a Leyline of Anticipation or Vedalken Orrery. Jace VP seems to defy all of these setbacks with a consistent card cycling ability, low CMC cost, and a option to flip him over into a quite powerful planeswalker if he isn't answered immediately. A bonus of opting for a cheap commander is that your commander can be part of your early game. Hopefully, we can stick a turn 2 Jace VP and not get punished for tapping out. After Jace is established, you can operate at mostly instant speed and leave up mana to interact with your opponents and stop someone from blowing the game up with a Show and Tell or a game ending combo. Our focus is making sure we get to the late game, keep making land drops and try to get whichever mana ramp or early card advantage engines into play. This is the main cluster of cards we use to win the game, and a staple package in most Mono Blue decks. High Tide is an explosive card and is especially gross with Jace VP flashing it back. If you cast High Tide with at least 6 Islands in play, Palinchron will make infinite mana. The way this works is that Palinchron in total costs 11 mana to cast and bounce, and his trigger untapping lands creates 12 mana if you have the minimum 6 islands in play, but can make up to 14 if you have a 7th Island. Every loop nets you 1 to 3 blue mana which you can dump into a giant Blue Sun's Zenith to draw your deck and then deck each opponent with Blue Sun's Zenith after it gets shuffled back in. Aetherflux Reservoir and Paradox Engine is another game ending combo. Reservoir acts as an obvious win condition but its lifegain can be valuable. It takes 4 spells to gain 10 life or 5 spells to gain 15 life; its easy to do in our deck by chaining cantrips or flashing back spells with Jace VP. This can buy precious time in our deck that isn't great at dealing with a board of aggressive creatures. Paradox Engine synergizes with our mana rocks as well as Jace VP himself, allowing you to loot several times if you have very few cards in your graveyard. You can win the game If you can set up an imprinted Isochron Scepter and a Sol Ring (or any rock that makes 2+ mana) alongside Aetherflux Reservoir and Paradox Engine. You can also swap in a Dramatic Reversal under the Scepter instead of needing Engine. It's a lot of pieces but it assures a win and is probably your end target during a convoluted combo turn. Now that we know our win conditions, how exactly do we ensure that we can live long enough to cast those? The answer to that is simple, its Nope! Nope! Nope! . I’m just kidding, but we will be countering their spells that offer too much harm to us. Counterspell, Force of Will, and Pact of Negation are my personal favorites. Nothing feels better than having one of your opponents see that you are tapped out, and cast a massive spell, expecting nothing to happen, when you cast Pact of Negation or Force of Will, disrupting their entire plan. Since we do not run an infinite supply of counterspells, make sure to save your counterspells for the juiciest targets. Playing against a variety of decks will help you to realize what is the most damaging to our deck, and what will allow us to live and cast our game breaking combos. Our main removal spells come in the forms of Cyclonic Rift (hopefully overloaded), Pongify, and Snap. While Cyclonic Rift and Snap are temporary removal spells, these spells can offer us an additional turn to live or a chace to lineup a counterspell for when they recast it. Pongify, while being a one of a kind blue removal spell, can easily be tutored out of our deck with Mystical Tutor, Spellseeker, and Merchant Scroll.

Before we conclude, there are a couple of key cards I would like to explain.

Jace VP is a very fun commander to play. Politics with this deck can be essential to us winning! Please be sure to converse with your opponents to see if you can benefit by countering certain spells. This politicking can often turn our opponents attention off of us while we dig through our deck for our combo! Overall I suggest this deck for anyone who is a fan of control decks, and who is looking for a fun and consistent way to win, and for anyone who enjoys heavy card draw and card cycling. This deck has provided me with a handful of very enjoyable wins. Thank you for reading this article, and I look forward to sharing more with you in the future!