The Brothers' War: One Card to Draft for Each Color The Brothers War is a really exciting set- There’s been a lot of buzz ever since we received the name of the set, and now with the spoiler season finished, It’s safe to say this buzz was well-worth. The set’s mechanics are flashy and interesting, the artifact bonus sheet is great for new and old players alike, and the flavor hits home for the Magic story: both past and present. With such a nostalgic set coming around, I want to dig into what hooked me into Magic: Drafting.

This is a speculative list of the best cards in each color for drafting- at the time of writing, we’re still a few days out from the pre-release, but that means that we have time to discuss cards to gun for in draft and to hope for in sealed. I’ll be covering one card for each color, with honorable mentions sections for anything that doesn't quite make the cut. Cards will be chosen based on their effectiveness in a color and in a draft environment. 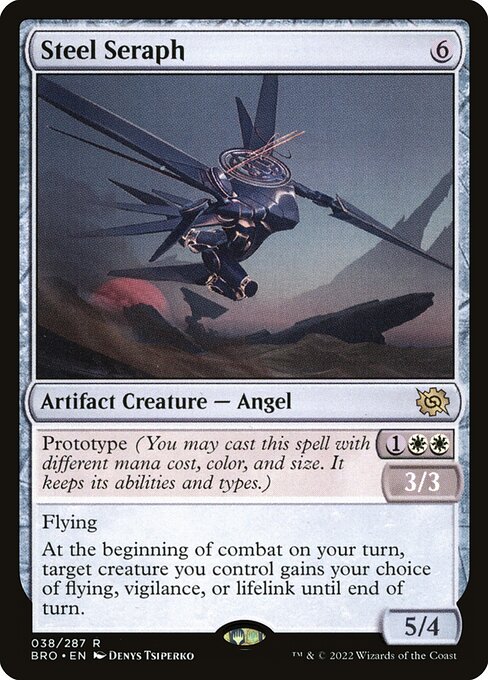 Prototype is a very rich mechanic. Aside from the absolute steller templating on the textbox, the mechanic enables cards to be costed for multiple formats and situations. The modularity is fantastic, and the colored pip requirements allows the effects on the cards to be tuned up. Steel Seraph is a powerful bomb that helps close out matches in the more combat-heavy Limited format. Dropping this on 3 is a fantastic way to smooth out an early curve, and the 3/3 statline with flying lets you contest many aggressive early threats. Drawing this late lets you get a strong 5/4 statline that can close out games, gain five to stabilize, or 2-for-1 with vigilance. The flexibility in this is fantastic overall. 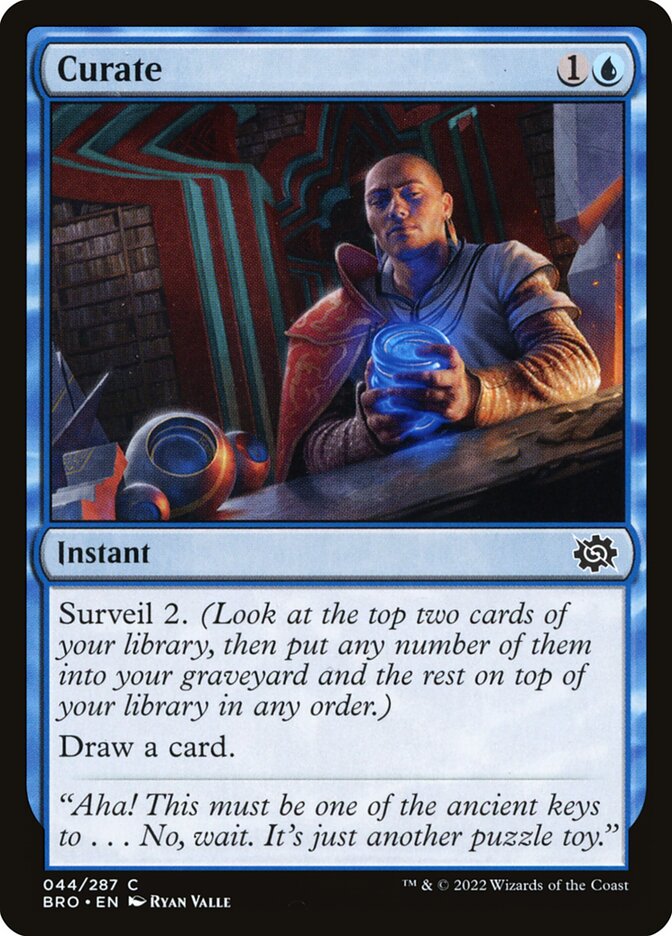 With Surveil becoming deciduous and keyworded, a card like this was bound to be printed. Curate plays in the same space in Serum Visions. What really elevates this, however, is the presence of Unearth in the set. Cards Surveilled away can generate additional value in more aggressive shells, and the deck manipulation plus cantrip keep control shells moving. The availability of this card is wonderful at common, and I expect we’ll be seeing alot of Curates on Pre-Release tables. 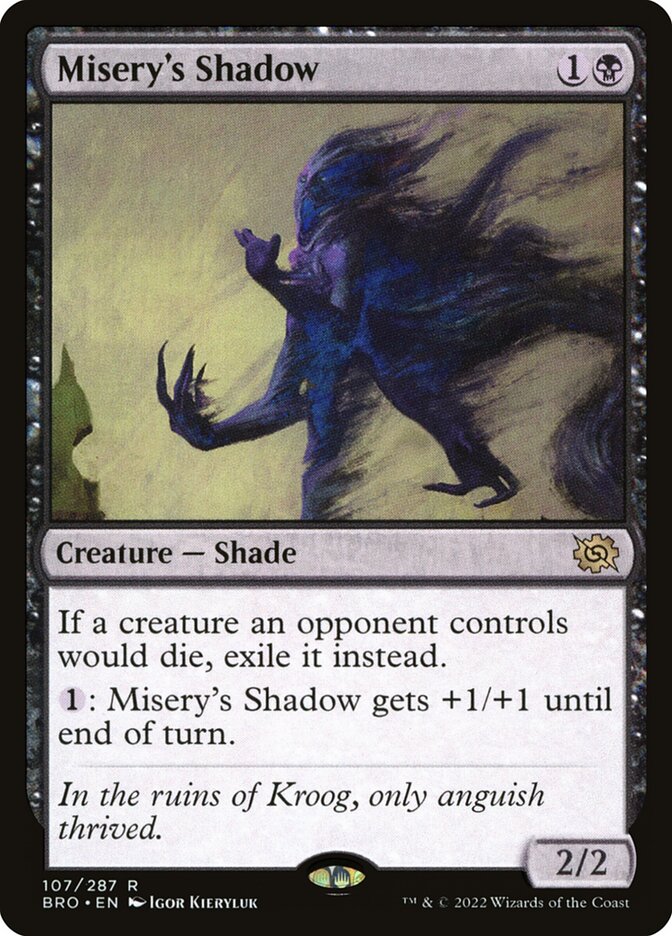 Shadow effects have been getting good. In the past, we’d have to lose toughness if we wanted to pump our shadows for a favorable trade. Powercreep aside, the cost being only 1 mana is especially important in this set. Powerstones love this card, and its 1-Black pip requirement makes Misery’s Shadow especially splashable. Excess Powerstones can keep this dangerous, and the exile rider can help keep your opponents Unearth cards off the field. In dedicated black shells however, this tends to be less impressive than mono-b rares. Picking Shadow will keep you open though, allowing you to draft into a Midrange Powerstone or aggressive BR drafts alongside Draconic Destiny. 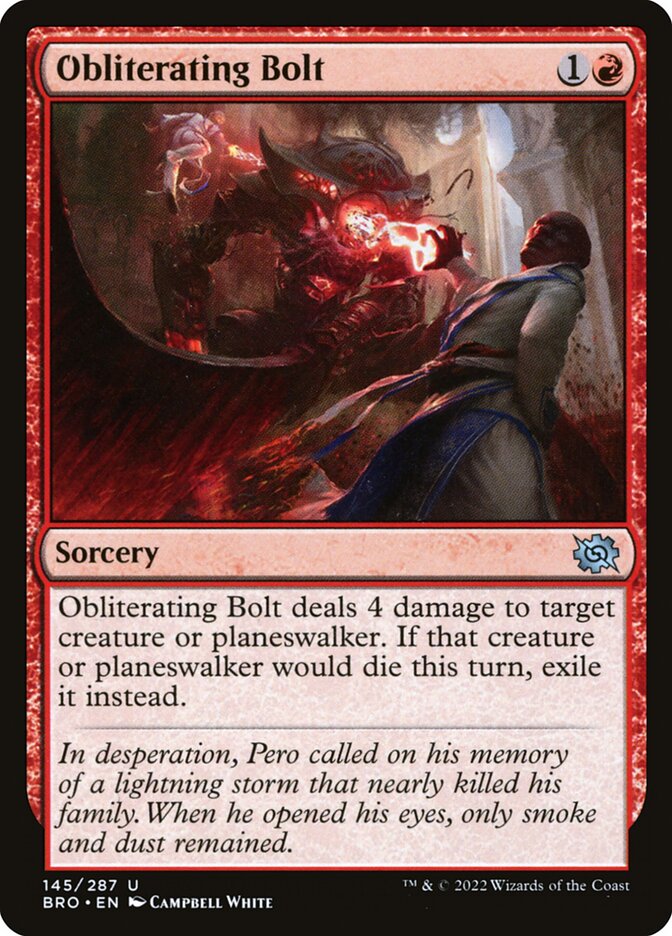 Removal is always a solid pick and Obliterating Bolt strikes a nice balance between power and availability. While this is locked to Sorcery speed, the ability to kill a solid chunk of prototypes and creature threats keeps the 4 damage relevant even on your turn. The exile rider is the extra touch to shut down Unearth strategies and keep this as solid removal. Red has other toys, but seems to want to support other archetypes primarily. This means that splashing for some Obliterating Bolts might open you up to other solid draft picks such as Bitter Reunion and Mishra’s Onslaught. 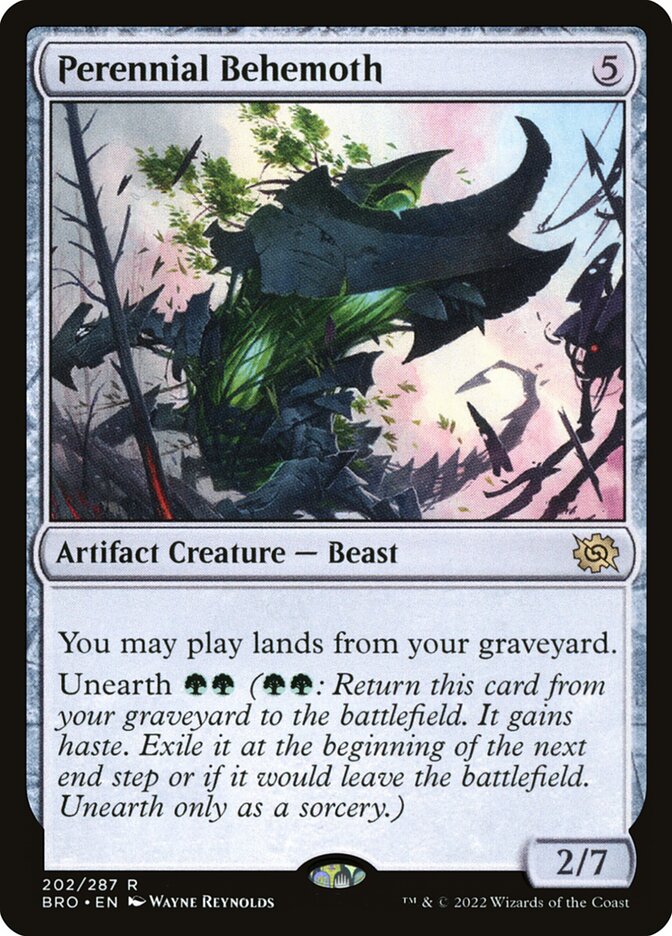 Perhaps an artifact with Green as its alternative casting cost taking the Green slot is cheating. But Cheating is exactly what Perennial Behemoth is here to do. At five mana, it's a bit expensive, but the effect absolutely hits home with the utility lands in BRO. You can recur Evolving Wilds for fixing, Blast Zone for removal, or the new Demolition Zone to turn off enemy painlands. Surveil and Impulsive Draw effects make this even better, and with Green only in its Unearth cost, Behemoth is easily splashable. In late-game stompy decks, this will help keep your mana flowing and the seven toughness will be able to block and get you there. No matter what you draft: Unearth, Powerstones, Artifact Stompy or Five-Color Nonsense, Perennial Behemoth will be there. 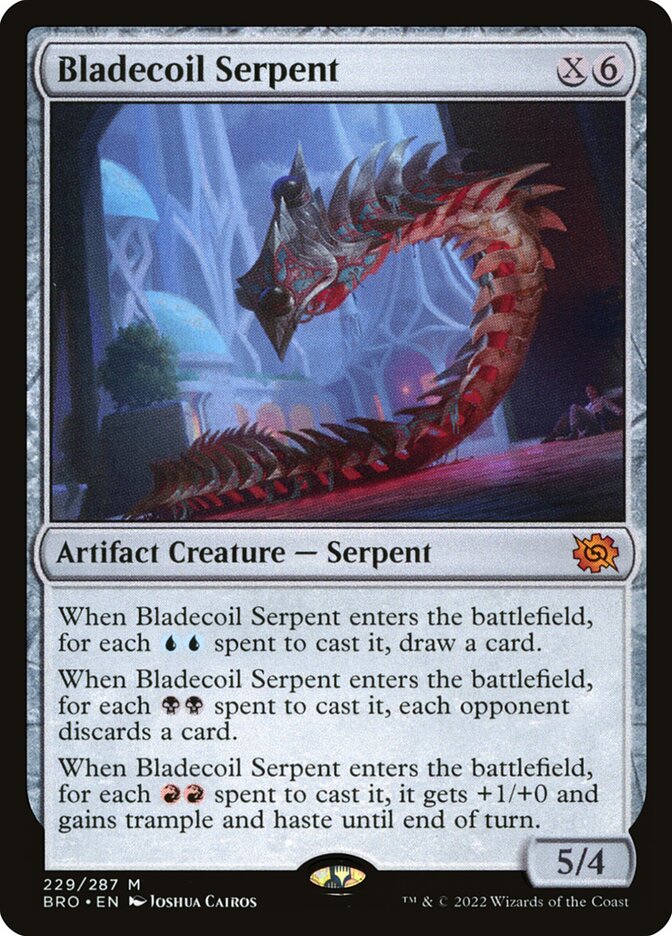 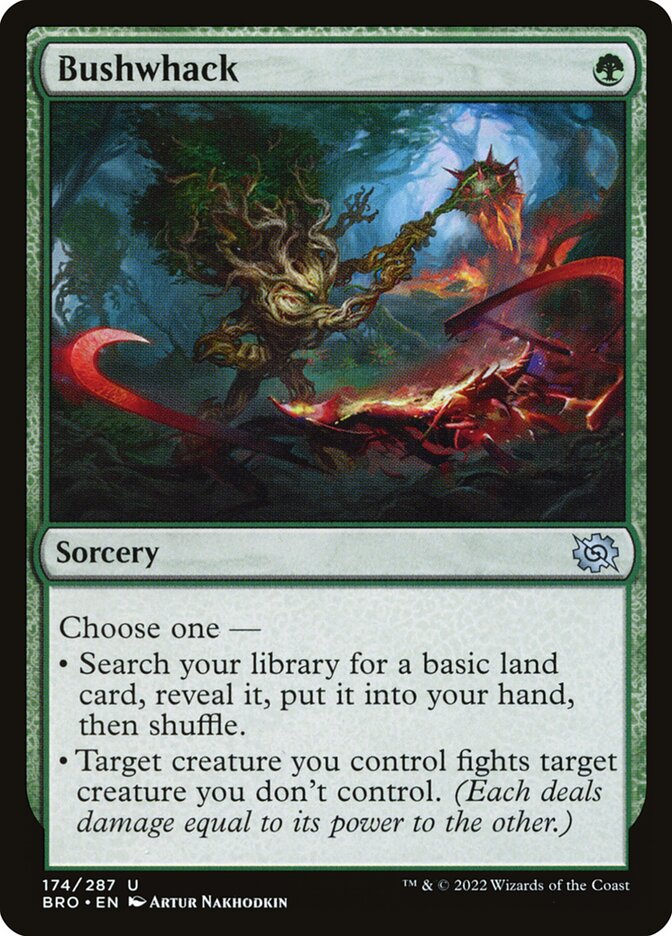 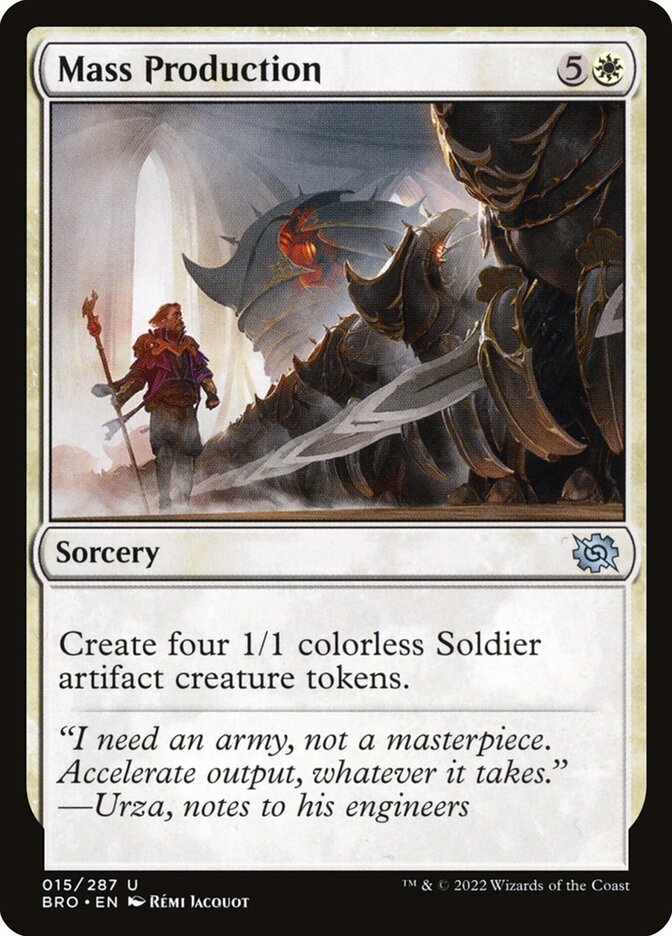 Honorable mentions go to Bladecoil Serpent, Bushwack, and Mass Production. Bladecoil is an absolute bomb, but has awful avalability and unfortunately won’t fit into enough decks. Both Black and Red have powerstone synergies, and going two or three colors with it feels weaker than just picking a mode three times. Bushwack is available, but seems a little slow for Limited. Fighting is strong removal in Green, and it’s competitive with one mana… but you’ll rarely be casting for its first mode. Mass Production is similar to another draft All-Star from NEO: Invoke Justice. Unfortunately for Mass Production, the Soldier synergy fails to make up for the lost power and the loss of Scry 3.