Space Marines vs. Necrons - Getting Started in 40k: The New Starter Sets As with the previous starter sets of last edition (8th) they come in three tiers - Recruit Edition, Elite Edition and Command Edition. So let's take a look at what each box contains and the differences between them. 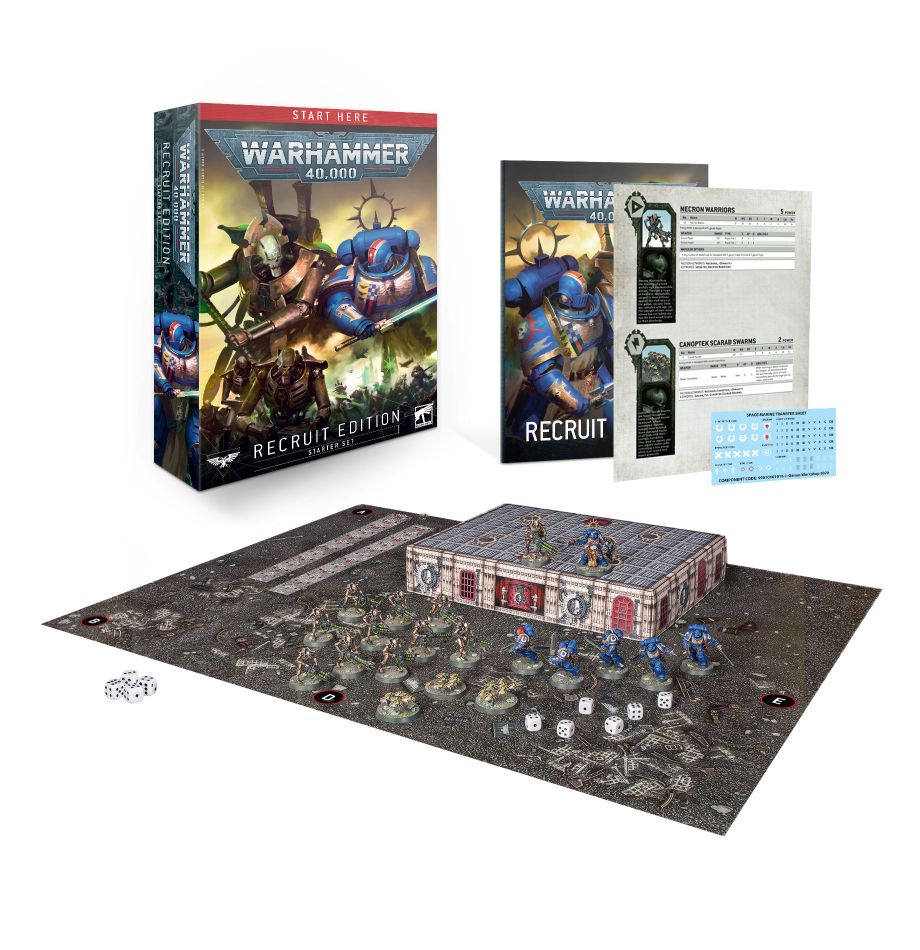 First up is the recruit edition, which as name implies, is perfect for people starting out with the hobby.
The set contains the basics for playing a small game of 40; a battle mat, a small rulebook and datasheets that contain the stats of the included models, two rulers and 10 dice as well as a cardboard terrain piece.
The models included are a new Primaris Lieutenant from the Indomitus box as well as 5 Assault Intercessors (with their new Astartes Chainswords, ooh fancy), for the Space Marines and for the Necrons you get the new Royal Warden, 10 Necron Warriors and 3 Scarab Swarms. This set also contains 6 missions that will allow you

to learn the basics in a hands on way. This is a great set to get yourself into the tabletop side of the hobby. The low amount of models means that you won't be spending a long time assembling or painting before getting into the action and learning the rules of the game. It is also the cheapest of the three options, you could even split the cost with a friend and get to grips with the hobby together. This is a great set to learn the basics and see if the tabletop side of the hobby is something you enjoy whilst also giving you scope to expand into two different factions. 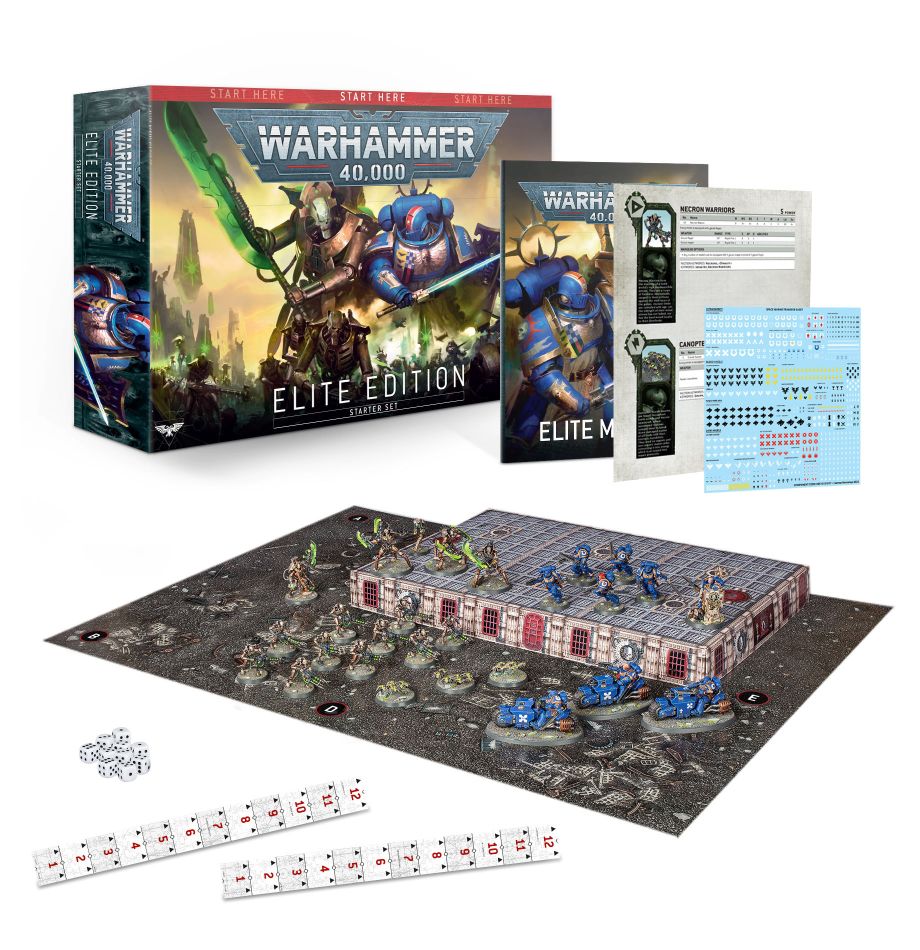 Next up the Elite Edition - the main difference between this and the recruit edition is the models included. The rule book is slightly longer (assembly guides for the extra models) and accessories are the same as the previous box but the models you get go up a level.

For the Space Marines you still get the 5 Assault Intercessors but you also get the 3 bike squad of Outrider Attack Bikes (Think Akira, but with power armour)  and the Primaris Lieutenant is replaced with the Primaris Captain, an incredibly cool looking model.

The Necrons themselves get beefed up with the 3 Scarab Swarms and 10 Warriors being bolstered with 3 Skorpekh Destroyers (big, bad, blades for arms) , a Plasmacyte and the Royal Warden is replaced with a Necron Overlord.

Again this is a good box for someone who wants a few more models to play with and the improved HQ options in the form of the Primaris Captain and Necron Overlord mean this is an excellent base for any army, allowing you to expand with the models of your choosing. 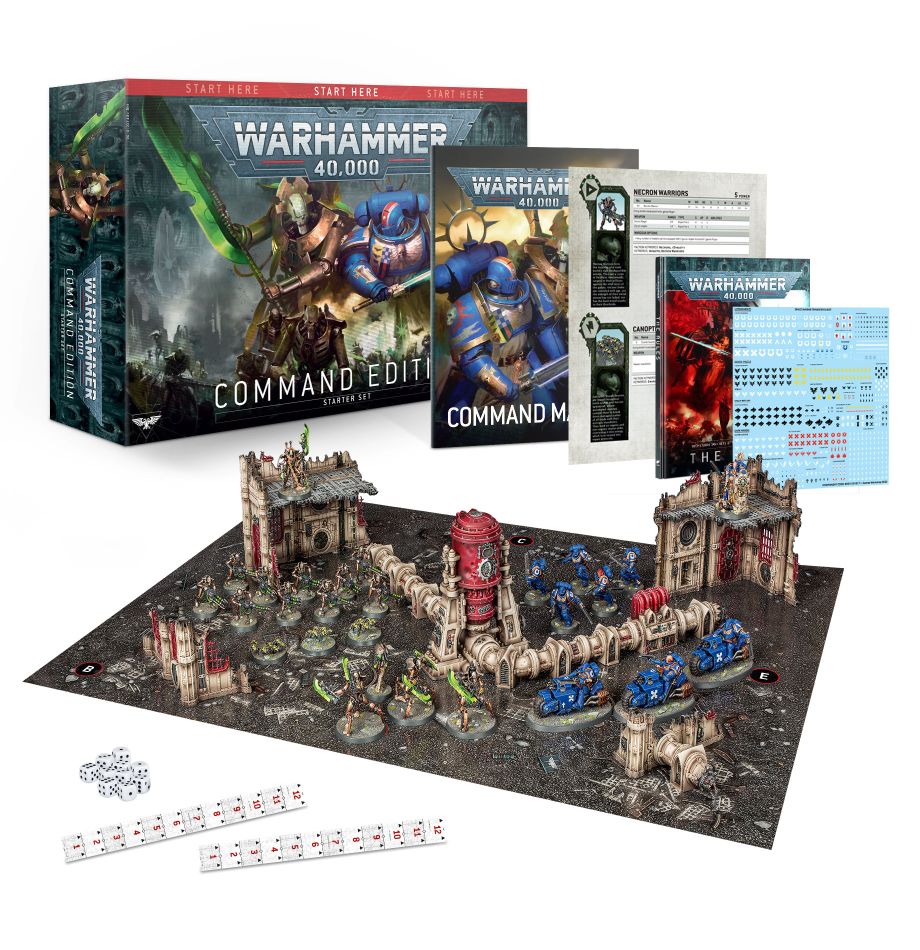 Although this is the most expensive set available and the largest in terms of what's included, the models in the box are the same as the Elite edition. This edition however includes all the previous accessories and the full Warhammer 40k rulebook and a whole heap of terrain.

Now I know what you are thinking - “Terrain? I don't want terrain, give me more lovely models!"
However, there is a very good reason for the inclusion of terrain over more models and it's one that links to the rule changes in 9th edition.

Terrain is a much more important factor in the new edition and playing on a board without it will not give you the full experience. Terrain provides benefits to models in the form of cover, or it can block other units from targeting them, preventing them from being blasted off the board in turn 1. Plus, the terrain in the box isn't the cardboard variety as in the two previous boxes, it is 4 ruin pieces, 1 large thermo shrine and 7 modular pipes, allowing you a variety of options for setting up the game board -  this edition also comes with a fold out game board as opposed to the game mat in the Recruit or Elite box.

If you are new to the hobby or a veteran of the scene this box is good value, allowing you to bolster your forces and providing some new cool terrain in one go as well as containing the full rule set.

Ultimately, which set you want to get depends on what you want to get out of it. The Recruit set is perfect for testing the hobby out before committing whereas the Command edition is perfect to get your hands on the 9th edition rulebook, some fancy new models and a handy game board and terrain set. It's worth mentioning for those new to the painting side of the hobby there are also two painting sets. One containing some Necron Warriors and the paints necessary to paint them as the new Szarekhan Dynasty and the other with some Assault Intercessors and the paints for the Ultramarines Chapter colour scheme.

This can be good to get the paints needed for these schemes in one purchase as well as providing some models to practice on.