A little over a week ago I came across a post by MTGO grinder Felix Sloo showcasing  a deck that pushed him into the Top 8 of a MTGO Super Qualifier, a note-worthy feat in itself….and what's that?....he did it with Jund!? That's right, this gorgeous decklist is a beautiful balance of that grindy Jund strategy you love paired with a package tailored to disassemble early aggression.

I've been taking a break from constructed magic, sticking to cube and trying to navigate my way through a handful of Ikoria drafts. But on a whim I fired up a Magic Online Pioneer League with Sloo's list and was surprised to finish at 4-1…..for the next 6 leagues in a row!(over a few days). That's a 75% win percentage! I consider myself an above average magic player, but I'm nowhere remotely near the best, so needless to say this streak seemed unordinary to me. Let's dive into why I've been winning and what I've loved about this deck vs. the Pioneer metagame. 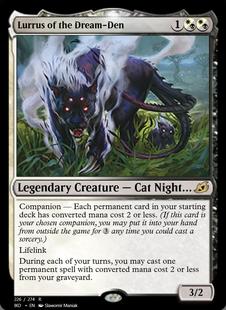 Let's talk about Lurrus of the Dream Den. This 3/2 Cat Nightmare ties the whole deck together. Jund loves to play a midrange game, and Lurrus lets us use are already high-value cards an additional time. Typically, I find myself waiting until I've exhausted almost all my resources before I play Lurrus. This isn't a hard and fast rule, but if your deck is doing its thing, your opponent should also be exhausted of resources, which means your Lurrus (hopefully) won't be contested. The existence of Lurrus as our companion allows us to be more aggressive when it comes to blocking and running out our creatures, due to the fact that under most circumstances we are guaranteed to buy at least one back later on. This companion also has great synergies with Dead Weight, Unbridled Growth to fix our mana and act as a sort-of Arcum's Astrolabe, and Soul-Guide Lantern to repeatedly exile an opponent's graveyard, or simply act as a cycling card.

Grim Flayer. This 4/4 (I hope) has barely been playable in Modern Jund and GB, but in this deck, he's basically our Tarmogoyf. Playing this on turn 2 on the play is an extremely strong push towards the midgame, and without Lightning Bolt and Path to Exile in the format, he's not easy to remove once he's buffed. Don't be afraid to throw all three cards in the graveyard, I do it quite frequently. Kroxa and Lurrus are your best end game cards, and both love a bulky graveyard.

Speaking of fueling the graveyard, let's talk about Satyr Wayfinder. Satyr Wayfinder is an important stepping stone in our painful mana base deck. You often shock yourself 3-5 times a game, and sometimes a Wayfinder on turn 2 helps you find a free untapped land in important aggressive matchups. In those same matchups Wayfinder is also a nice chump blocker to soak up a few points of damage. In the grindier matchups, Wayfinder is one of my go to Lurrus targets. When I know that none of my creatures are going to stick as I get to the late game against control, Kroxa gives me the best chance of winning the game. To lay into this idea, I'll sometimes put my Lurrus in the line of fire, just to play Lurrus + Wayfinder and dig deeper to fuel and try to find the Elder Giant.

Kroxa, Titan of Death's Hunger. Wow. It's quite possible that this card wins me more games than any other card in the deck. At first glance you might think “oh sure, but Kroxa is clunky on turn 2, it doesn't stick around, it's not that great anyway”. At least, that's what I said to myself at first. It turns out that kroxa is just the perfect card for grinding, and if you're able to stabilize, most aggressive decks have no way to deal with the 6/6 body.

Here are some tips for playing with Kroxa

Scavenging Ooze is a strong holdover from Modern Jund. Ooze is great at attacking opposing Lurrus strategies(of which there are many), the rare Zirda, the Dawnwaker Cycling deck(as it can eat up cards to reduce Zenith Flare's effect), and sometimes hinders Dimir Inverter by taking away fuel for Dig Through Time. But the ooze isn't just a great anti-GY card. It's ALSO is a great buffer against aggressive decks. I've won countless games by sticking Ooze on a later turn against the various Boros strategies and eating two creatures immediately to take my Ooze out of (most) burn spell range while gaining some much needed life. Ooze is both preemptive, disruptive, and can bring you back into a game.

Last but not least, an Ikoria mythic shows it's worth. Chevill, Bane of Monsters. There isn't much to say about Chevill, other than that he's a solid death touch creature, with a relevant 3 points of toughness and some added value tacked on. Sounds like a good fit for Jund!

Any Green-Black-x deck worth its salt is packed with great creatures, but what about the spells?

Since I've been comparing this list to Modern Jund a fair amount, let's breeze through some of the cards they share. Fatal Push is the best small-to-mid sized creature removal spell in the format, and between Unbridled Growth, Kroxa, chumping with Satyr Wayfinder and sacrificing Fabled Passage it isn't hard to trigger Revolt if we need to. Thoughtseize is one of the best cards in Pioneer period. Without the existence of Inquisition of Kozilek, it is easy to see why we start off with 4 in our list. Abrupt Decay/Assassin's Trophy/Kolaghan's Command/Dreadbore/Hero's Downfall all come and go in some number in Modern. These are all versatile removal spells, and although it's awkward to mill your one-ofs with Satyr Wayfinder occasionally, it's worth the risk to keep our deck focused on a streamlined, on-board plan.

The enchantments and artifacts of this deck deserve a separate section all themselves. Yet again we find parts of our deck that synergize well with Lurrus. Having a variety of card types in our deck also means that Grim Flayer is a 4/4 a lot more consistently then he would be otherwise. But they provide so much more. Dead Weight is such an important card because of the abundance of Boros Aggro decks. This enchantment is crucial at killing literally every creature (except maybe Dreadhorde Arcanist) in their deck. It's also important to note that Dead Weight vs. Disfigure is not even close, because deadweight still kills Monastery Swiftspear and Soul-Scar Mage when the prowess triggers fade and it can be reused. A common turn 5 line against Red decks is Dead Weight your Eidolon of the Great Revel, play Lurrus, Dead Weight another creature. Our other enchantment is a weird one. Maybe it's just because I didn't play during Kaladesh-Aether Revolt, but I sure hadn't heard of Unbridled Growth. I'm still unsure how I feel about the card, but it's nice to have something to do if you play Lurrus with 4 lands out. If you've played with Lurrus in Legacy or Modern Growth feels somewhat similar to the pairing of the powerful Companion with Mishra's Bauble; we all love drawing another card. Unbridled Growth can also be sacrificed for free to fuel Escape or Grim Flayer which is a huge point in its favor.

This leaves us with Soul-Guide Lantern left to discuss. If I'm being honest, I was hesitant at first. You mean I can't exile graveyards AND draw a card? It can't possibly be better than Relic of Progenitus right? WRONG. Relic has its place(albeit not in Pioneer), but because we are playing a Lurrus deck, 1 mana to exile our opponents graveyard is crucial. There are so many Lurrus decks running around, I cannot overstate this enough, and Lantern is a critical card in beating up on them. It even helps against some miscellaneous graveyard decks: from Bant Yorion, Sky Nomad with Uro, Titan of Nature's Wrath to Zirda cycling with the aforementioned Zenith Flare. It also doesn't hurt that it can just turn into another card if needed!

The lands are pretty straightforward, my only tip is to watch your life total, but also recognize when it's right to aggressively shock yourself. This is a skill that takes practice to master. Lastly, Basic Mountain is the worst land in the deck, don't fetch it up unless you need it for Kroxa.

This should by no means be a hard and fast guide to sideboarding, and if you have any differing thoughts from mine, please comment and let me know!!

Although Thoughtseize can pick apart more than 2 damage worth of creature/spell equity, it is much too costly to keep in, especially because we are likely to have to shock ourselves turn one to be able to cast it. Duress doesn't take a creature, but information is valuable in this tight matchup, and a Light Up the Stage or Boros Charm is just as good of a target. Kroxa is good, and one of my most frequent finishers against red, but 3 is a lot of copies and we need the space. Barrier Breach comes in against these decks because of its ability to clean up Chained to the Rocks and Eidolon of the Great Revel.

This is a very similar matchup to the previously mentioned decks, but I don't like bringing in Barrier Breach because they don't play Eidolon and have less copies of Chained to the Rocks.

This is a scary matchup, and you need to always be weary of sweepers. Try not to overcommit and time your removal spells accordingly. Scrapheap Scrounger is an absolute all star here, and it's easy to see that we take out all of our bad creature removal to beef up our deck. Be cautious about keeping too slow of a hand if you see a Yorion in your opponents Companion zone. That said, I find myself winning by grinding my opponents out with Kroxa quite frequently.

This matchup ends up playing similarly to control, but their way to get back into the game is to combo, not stabilize. You need to keep consistent pressure on your opponent at all times, and be cautious when trying to go for the grind-out the game strategy.

Another matchup similar to control, but with some weird nuances. It's important to keep an eye on their graveyard, because they could be building towards a large Zenith Flare at any time. Slaughter Games is mostly for naming Zenith Flare and Shark Typhoon as these are their main wincons and are both 4 ofs.

In this matchup we have to race, and I'm not even sure Slaughter Games is good enough. If you do cast Slaughter Games, it's important to name Fae of Wishes // Granted, because they can always use Fae to get their 4th copy of Breach out of the sideboard. Scrapheap helps us be aggressive, and if perfect for getting past an Arboreal Grazer.


There are numerous strategies competing in Pioneer right now, but piloting Jund I feel confident that I can Take Down any foe I come across (except maybe 5-Color Niv). If you get a chance to test it for yourself, please let me know! And as always you can reach me in the comments or @jeremy_langevin on twitter.