Playing Standard in a Modern World Standard may be slow and Historic is waiting on its next anthology, but all of that seems to be okay since it's spoiler season for Modern Horizons 2. Luckily for fans of Standard, some spoilers from the next set, Dungeons & Dragons: Adventures in the Forgotten Realms, have begun to drop here and there to get us excited about the format again. While the spoilers have been out for some time now, it will be beneficial to understand what the format can use from the D&D set to shake up some of the best decks and give us something new in the top tier.

Rather than invent new cards to deal with the current best decks, let's look at the weaknesses of some of the top decks, and see what current gaps exist in the format. Since its inception in Kaldheim, this deck has operated the same way, with just a few tweaks depending on how you want to hedge certain matchups in game 1. When the deck isn't trying to win by casting Emergent Ultimatum, it is trying to stall the game to go as long as possible with its swath of removal and counter spells. However, what this deck does lack is the consistency of it's interaction. As most of this deck's counters are soft counters, such as Jwari Disruption and Mystical Dispute, the only catch-all card that this deck plays is Binding the Old Gods. Right now this is perfectly fine for Sultai-Yorion because almost every other deck in the format is a creature based deck and all of its removal spells (except for Eliminate in the mirror) will be able to find a target. This means that a gap exists in the format for either a non-creature or possible hexproof based strategy to rise through the ranks and blank a lot of the removal spells that this deck has to offer. Since Sultai-Yorion is an 80-card deck, its inherent weakness will be its consistency, and by introducing new strategies into the format, it may spread its spells too thin and not be the powerhouse it currently is. Utilizing the power of Stomp and Frostbite to stall enough to get the mana-making synergy of Goldspan Dragon and Galazeth Prismari allows for this deck to cast some pretty sweet finishers. Whether Magma Opus or Alrund's Epiphany is being cast, this deck is a force to be reckoned with. It may have extremely efficient removal and counter spells, but what this deck does not have is a good sweeper of any kind. It may be able to deal with Winota, Joiner of Forces decks with cards like Brazen Borrower // Petty Theft , but any real token strategy will be able to go wide-enough to circumvent anything that this deck wants to do. Once tokens are on the battlefield, the only two threats that have to be dealt with are the two dragons. While I don't expect any card like Conclave Tribunal to be printed in the next set, there are vast amounts of ways in every color to deal with a 4/4 flier, and whichever color the token deck winds up in will find a way to deal with these two powerful cards. Fortunately for Dimir Rogue players, Blue and Black are versatile enough colors that they can adapt to almost any situation. Unlike Izzet Midrange, this deck can run board sweepers such as Crippling Fear. Alongside sweepers, Drown in the Loch offers a great catch-all card. Since this deck has even seen play in Historic, where it gets amazing hand disruption as a power boost, there have been cards sideboarded specifically to hose this deck. The best one being Rest in Peace. Where Rest in Peace shines, Soul-Guide Lantern does not. Rest in Peace 's ability to exile the caster's own graveyard helps to nullify any synergy the Rogues deck has. While I do not expect Rest in Peace to be printed as it may just be too powerful while Escape cards are still in the format, another graveyard hate option that targets your own graveyard will severely weaken this deck's future. When Uro, Titan of Nature's Wrath was still legal in Standard, it felt like every card had “gain X life” stapled onto it. While that might have been true with cards like The Birth of Meletis and Dream Trawler seeing play in some of the best decks at the time, now incidental lifegain is needed. Players by now have figured out how to build their decks to avoid random losses to Embercleave, by packing in more spot removal than creatures to block with. However, Red cards in this standard are insanely efficient against removal. Robber of the Rich, Anax, Hardened in the Forge, and Bonecrusher Giant all offer forms of card or damage advantage against opponents removal spells and have allowed the deck to maintain a spot at the top, despite giving the meta plenty of time to adjust. Fortunately, Prosperous Innkeeper offers Standard a new soul-sister effect and will hopefully see Mono-Red pushed down a peg despite the power of Embercleave and Torbran, Thane of Red Fell. 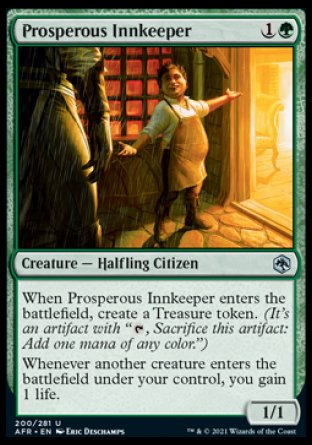 At the end of the day Standard is pretty healthy with a Combo/Control deck, a Tempo deck, a Midrange deck, and an Aggro deck all at the top. That being said, I am sure that many players would be fine if there was a period of time in which Emergent Ultimatum and Bonecrusher Giant // Stomp were not the best cards in the format. Let me know what you would like to see in the next Standard set down below in the comments, and I'll see you next week!