The Subtle (But Brilliant) Design Innovations of Zendikar Rising While the set hasn't been completely previewed yet, the cards we've seen so far from Zendikar Rising (ZNR) have shown us new promising trends in Magic design that I hope will carry into future sets.

From Teferi and Oko to Nissa and Lukka, planeswalkers in the last year have largely had detrimental effects on competitive gameplay. This puts Wizards in a tricky spot; planeswalkers are the most popular card type and are invaluable to marketing, but they're difficult to balance for competitive gameplay in a way that makes them not just fair, but fun. Historically, Wizards has relied on the ability of planeswalkers to be attacked by creatures to control them, but this doesn't work well for planeswalkers with high loyalty, low converted mana cost, or both (Oko). In the same way that combat is not the only method available to remove creatures, Wizards has increasingly allowed low-rarity spells to answer planeswalkers as well. This isn't a new trend; War of the Spark utilized cards like Domri's Ambush and Spark Harvest to answer both creatures and planeswalkers, a necessity in the Limited environment. Ikoria pushed this trend by giving Red and Green access to direct damage to walkers. One might point out that Black has always had answers to planeswalkers (Hero's Downfall, Ruinous Path, Eat to Extinction, the list goes on and on), so what's different about these new cards? Hero's Downfall without the planeswalker clause is Murder, a card that, for the most part, is unplayable in Constructed. Eliminate without the planeswalker clause, on the other hand, is certainly playable in Constructed. Wizards has a long history of printing two-mana removal spells in Black with restrictions (Doom Blade, Ultimate Price, Cast Down). They often like to print spells that read as:

Kill Something
1B
Instant

Destroy target creature that does not fall under the umbrella of this set's theme.

Hence Ultimate Price showing up in Ravnica and Cast Down in Dominaria. These spells are almost always playable to some extent because Constructed, containing multiple sets, does not usually depend on any individual set's theme, and there are always great cards off-theme anyways.

This approach to designing Black removal is interesting because it forces players to make metagame-dependent decisions during deckbuilding. What's the right mix of removal spells? Is the player willing to pay more mana for a spell that hits more threats? While this has been the approach to creature removal, killing planeswalkers has typically cost three mana with a mix of upside and downside (Ruinous Path – sorcery, but Awaken; Murderous Rider – lose two life, but get a creature) or four mana with an upside (Vraska's Contempt, Eat to Extinction). Low-rarity removal means that players will be able to kill planeswalkers at a better rate in a way that is more convenient to deck-building. You may still want some number of Vraska's Contempt in your Standard deck, but now, when planeswalkers are popular, you're not automatically locked into four and forced to, usually, trade down. Instead, you can customize with more competitive options such as Eliminate and Blitz of the Thunder-Raptor. Cheap, narrow removal spells capable of answering planeswalkers are a good direction, as we've seen with creatures for years.

The other benefit of tacking on “or planeswalker” to the traditional low-rarity Limited removal spells is that it leads to fewer feel-bad games where one player runs away with a win entirely on the back of a planeswalker. The staple 4B “kill a creature” that shows up in Limited and is always playable now answers your opponent's planeswalkers too, if they're lucky enough to have pulled one.

The design of these cards is fabulous, as it mitigates the problem of mana screw or flood. While both sides are less than their standalone rate (lands come in tapped, one or two additional mana is tacked onto the spell side), the flexibility makes it worth it. In the same way as Cryptic Command, you'd never pay 1UUU for counter a spell and draw a card, but the flexibility to choose among six different combinations of modes makes it powerful. While these cards only allow a choice between two, flexibility is worth paying for. Sadly, these cards look better-positioned to make a splash in Limited than Constructed. While Constructed formats of old would have loved the mana smoothing, Constructed formats in the last year have been much more about your deck “doing its powerful thing.” If it succeeds on that front (Cat/Oven, Fires/Cav, Rec/Explosion, Lukka/token, Spiral/Uro, Nissa/Krasis, etc) then it doesn't really care about mana smoothing. Hopefully, the next Standard formats will be better-balanced than the ones players have suffered through since War of the Spark, allowing these new DFC's to shine.

There are other axes along which these DFC's are great in ZNR. With Landfall as a central, pushed mechanic, the ability to have additional lands to drop when you want them should not be underestimated. Also, cards that return lands to a player's hand have additional utility. Now, a player can mitigate screw early on, then bounce the land and cast the spell side to mitigate flood in the late game. Equipment that Attach on Enter-the-Battlefield 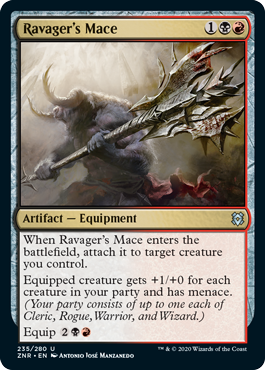 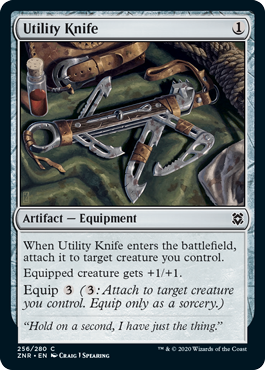 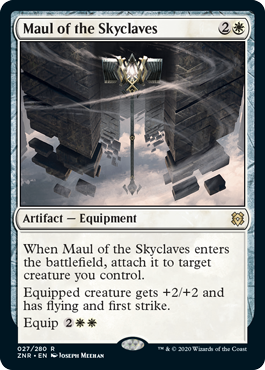 The Zendikar Rising equipment behave like a brand new card type – an Aura that can be activated again when the creature dies. This is a far simpler card to balance, allowing Wizards to push the power level a bit higher than they have in the years since the Swords. The card is also more intuitive for new players; like every other card, the mana cost actually tells the player how much to pay for it to do its thing. Brilliantly, this also allows Wizards to consistently push equip costs higher, while lowering mana costs. The mana cost might be what you'd pay for an Aura, but the equip cost is justifiably higher because you're getting an extra spell/free card out of it. Now, players are more likely to have to spend their entire time equipping, which means that the power level is justifiably higher.

This is the new design I am most excited to play with, and, while it may appear small, these new equipment are quite a revolution.

Critical mass decks based around non-creatures often run into a problem; they need the perfect mix of enablers and payoffs. In Standard, there is often a deficiency of good enablers. The old Standard Arclight Phoenix deck is a good example; it was forced to play cards like Shock to hit critical mass. In Limited, it's even more difficult to hit a good, synergistic mix if you're trying to draft, for example, the UR spells archetype in pretty much any draft format. It's harder still in Sealed; whatever theme BG has, its individual cards tend to be more playable off-theme than Wee Dragonauts and its UR friends.

Wizards has offered us a compelling design breakthrough in cards like these. 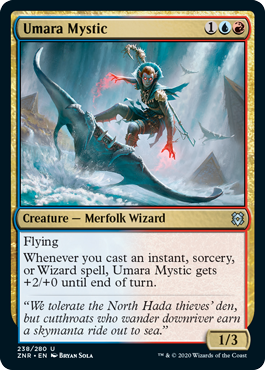 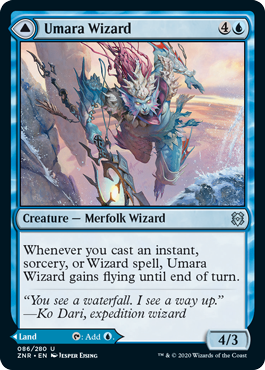 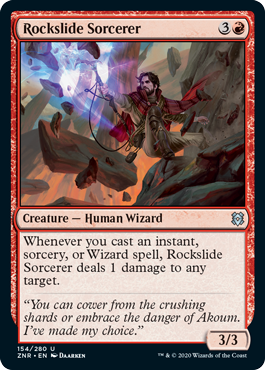 Wizards fixed the problem in the same way that Tribal decks fixed it; the payoffs count as enablers. Playable spells-matter decks become much more realistic because, suddenly, the percentage of cards that will count toward your critical mass increases by a substantial amount.

The lowest-hanging fruit of this vein of design space is the one that Wizards chose: adding Wizards to instants and sorceries because the creatures that typically care about instants and sorceries are Wizards. But Wizards can go further; they can have Artificers that care about artifacts or Artificers, Warriors that care about Equipment or Warriors, and Druids that care about lands or Druids. This idea is likely an extension of the batching of Legendary, Artifact, and Saga cards into historic cards in Dominaria, and I'm excited to see where else this will take the game.

In the past, cost reduction mechanics have been among the most broken. When Dig Through Time and Treasure Cruise were printed, I remember people claiming they were far too expensive, even with the Delve cost. Like Wizards, players underestimated how easy it actually was to bring Dig down to UU and Cruise to U. Cost reduction has typically been designed as “This costs X less where X is the number of [objects].” The objects, however, have been broad: cards in graveyard, artifacts on board, etc. In Zendikar Rising, Wizards gets narrower, both in magnitude of reduction and in object class. This style of cost reduction is promising. First, the magnitude of the reduction can never be larger than four, giving Wizards a very clear window into the power of the spell. Where Dig Through Time and Treasure Cruise had ranges of six and seven respectively, every single card that reduces its cost based on party size has a range of four. This consistency and smaller size automatically makes it easier to control the power level of these cards. Second, instead of counting how many of [object] do you have, encouraging players to maximize those objects, the batching technology counting Party encourages players to include different things in their deck. In Modern, you will naturally fuel Delve in a deck with fetchlands. In an Affinity deck, you will always have enough artifacts to bring Affinity cards down to 0. Using disparate, otherwise unrelated categories of items to reduce cost significantly decreases the risk of brokenness. Wizards, Clerics, Rogues, and Warriors are all narrow enough that they don't naturally pop up in most games of Magic. Another important restriction is only caring about the first instance of each member of the party. Two Wizards only generate a reduction of one. This is a clever way to prevent breaking cards; by forcing weird combinations of cards for the largest reductions, the power level of the deck is automatically weakened. Once again, Wizards has expanded upon the idea of batching that first appeared in Dominaria to come up with a safer new take on cost reduction. While Wizards continuing to mess with fast mana in cards like Lotus Cobra concerns me, I'm very pleased with the great design trends that ZNR has shown us. With new takes on flexibility (alongside old ones like Kicker) and new applications of batching technology, Wizards has shown us that even after twenty-seven years, the ideas are still flowing!