In February 2016, the Pokemon Company International (“PCI”) released the Generations Pokemon TCG booster expansion, a set released in conjunction with the TCG’s twentieth anniversary. Generations proved to be a popular expansion. Collectors appreciated the nostalgic homage to the early days of the TCG via the set’s heavy reliance on Pokemon from the first generation of video games. But Generations offered more than just a fresh coat of paint on old Pokemon, the expansion was PCI’s experiment in a new method of distributing Pokemon TCG products. Gone were the traditional methods of acquiring cards via booster boxes and blister packs, replaced by mass market influenced pin collections. Given the wide demand for the set, the experiment was deemed a success and in October 2017, Shining Legends, the successor to this distribution style was released. Shining Legends quickly established itself as one of the better collectors sets in recent memory by reintroducing Shining Pokemon from the Neo era into the TCG, providing a number of new Pokemon GX, and offering a foil card in every pack. Last Friday, the third expansion to be distributed using the Generations model was released: Dragon Majesty. Now that the expansion has been on store shelves for over a week, it’s time to examine what this new release offers Pokemon TCG collectors.

Dragon Majesty draws inspiration from a number of TCG sources. Last month’s Celestial Storm expansion included many cards from the Japanese exclusive Champion Road subset, but a number of cards from that expansion were left out. Many of those forgotten Champion Road cards have been incorporated into Dragon Majesty, along with most of the cards from another Japanese exclusive subset, Dragon Storm and a handful of cards from Sky-Splitting Charisma that were also left out of the English Celestial Storm expansion (such as Altaria GX). For more information on the composition of Celestial Storm, check out my article on the set here. 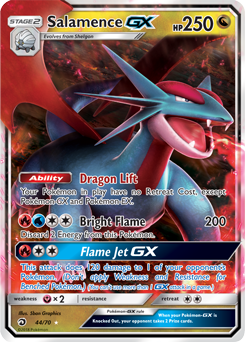 While modern influences on the expansion are apparent, Dragon Majesty also draws inspiration from older sets. Long time players and collectors will likely remember Dragon Vault, a 2012 Black and White era release that introduced the “dragon” elemental type to the TCG. Like Dragon Majesty, Dragon Vault was only available in special products designed with mass market consumers in mind, but Dragon Vault was incredibly small, featuring only 21 cards (and no reverse holos).  Dragon Majesty is similar in size to Generations (83 standard cards) and Shining Legends (78 standard cards), with a total of 78 standard cards and 65 reverse holo cards (which includes 9 reverse holo energy cards). Despite being similar in size to its predecessors, Dragon Majesty’s composition departs in a number of ways from its predecessors. It is the first Generations style set to feature Prism Star cards, it’s line-up of Ultra Rare and Secret Rare cards is similar to the breakdown used in other Sun and Moon era expansions (6 standard GX rares, 6 ultra rares and 8 secret rares – 4 of which being hyper rares), and it is the first such set to feature a solid gold secret rare card, Ultra Necrozma GX, a card that is currently selling for around $100 on the secondary market.

Like Generations and Shining Legends, each booster pack of Dragon Majesty contains at least one holographic rare card and there are no non-holo rares in the set. A foil card per pack helps justify the relatively steep $5 per pack price tag of the expansion, but like the previous Generations style releases, the lack of a dedicated booster box for this expansion makes buying in bulk difficult and expensive. If you are looking to buy in bulk, your best bet will likely be to wait for the release of the elite trainer box on September 21st.

Other than the aforementioned Ultra Necrozma GX, there are a number of cards in this expansion that warrant attention from collectors. First, the set pays homage to the early days of the TCG by featuring reused artwork from the Neo and original ex era of the game. As previously mentioned, the cards filling this role are many of the cards from Champion Road that were kept out of last month’s Celestial Storm expansion, including standard GX and hyper rare versions of Salamence GX.

Second, the pokemon comprising the GX cards in Dragon Majesty are sure to elicit excitement from long-time fans of the franchise. The GX pokemon include enduring fan favorites (such as Dragonite, Kingdra and Salamence) and several legendary pokemon (including Reshiram, White Kyurem and Ultra Necrozma).

What are your thoughts on Dragon Majesty? Do you like the Generations distribution model or do you wish they would release these smaller sets in a more traditional format? Let me know in the comments below.